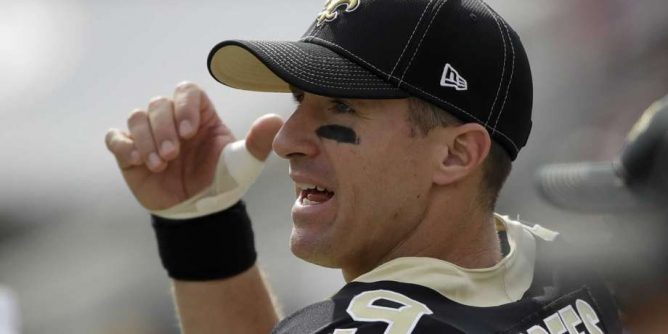 The evaluation, ESPN’s Adam Schefter reported, revealed the need for thumb surgery that could be done as early as Monday and could sideline Brees, one of the NFL’s iron men, for about six weeks. NFL Network’s Ian Rapoport reported that Brees has a torn ligament in his throwing thumb, and cited the same six-week estimate.

The Saints made Teddy Bridgewater the NFL’s highest-paid backup for a reason and now he’ll get a chance to play in meaningful games. In Sunday’s 27-9 loss to the Rams, he completed 17 of 30 passes for 165 yards, with no touchdowns and no interceptions. He had two carries for five yards. Bridgewater signed a one-year, fully guaranteed deal for $7.25 million in the offseason.

Brees, meantime, met with with a Los Angeles hand specialist, reportedly Dr. Steven Shinn, the director of hand surgery at the Kerlan-Jobe Institute at Cedars-Sinai. Although he had X-rays Sunday at the Coliseum, he chose not to say what they’d revealed until he had spoken with the specialist. With consecutive games on the West Coast, the Saints did not return to New Orleans and instead headed to Seattle for next week’s game, leaving the NFL’s all-time leading passer behind in Southern California…