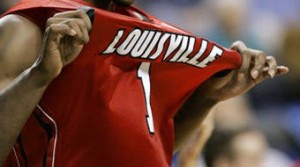 After going 7-1 in the Sweet 16 games, we’re back now that we have an opinion for the NCAA National Championshp Game. Most of the games between then and now we have simply not had a good opinion on. It’s important to pick your spots.

LOUISVILLE -4 over Michigan. We tabbed the #1 seed Louisville Cardinals as the overall winner at the beginning of the tournament, and nothing has happened to change that opinion. Make no mistake that the injury to guard Kevin Ware is a big loss to the Cardinals but they have depth rarely seen at this level. Louisville lost a tough one to the Kentucky Wildcats, one of the best teams of the past decade or two, in last year’s semi-finals and this team is significantly better than last year’s team. They have incredible team unity, and on any given night, two or three different star players step up with a huge game.

The key will be shutting down McGary, the freshman phenom for the Wolverines. No coach is better than Pitino at shutting down an opponent’s star player, and Pitino is very familiar with Michigan coach Beline, who used to coach at the University of West Virginia. Pitino’s team is so versatile that they can make their own matchups to their benefit.

Look for Dieng and Van Trese to neutralize McGary, and if that happens, Michigan is in big trouble. Louisville has a sensational record ATS over the last two seasons in the tournament, and we believe they can keep that going. This is a team that put a devastating 44-10 run on Syracuse in the Big East Championship game and also defeated them in the Carrier Dome. Michigan was life and death to put away the Orangemen on Saturday night.

This may be a very good game, but it could also easily be a double digit win for the Cardinals. Look for Louisville to cover the spread.