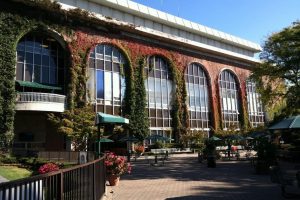 Horse Racing Spot Play for Belmont Park – 10/4/18 – race 6 on the turf.  #6 FINAL FRONTIER is regally bred for the grass and ran like it in his turf debut at Saratoga.  He hung on for a game win over a nice field, but he became a recipient of the three blind mice in the stewards stand.  3yo gets redemption for his connections today.