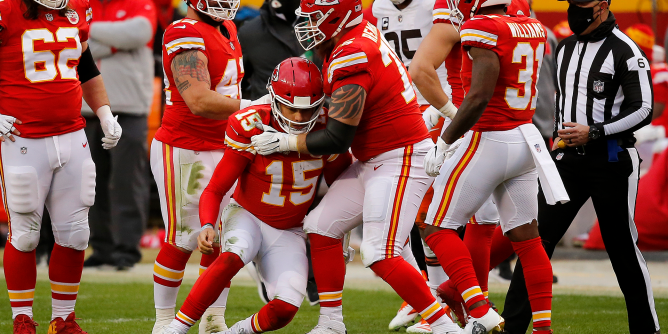 The NFL’s concussion protocol and its very specific timeline and guidelines could determine the fate of the Kansas City Chiefs’ season. Patrick Mahomes is widely thought to be concussed, and his status for the AFC Championship Game is in doubt.

The Chiefs’ superstar quarterback was injured during the third quarter of Kansas City’s divisional round win over the Cleveland Browns. While scrambling, he was brought to the ground with the tackler wrapped around his neck. Mahomes’ head collided with the ground while his neck appeared to be twisted. Mahomes tried to get up and initially struggled before falling back to the ground. He eventually ran off to the locker room before being ruled out for the remainder of the contest, forcing backup Chad Henne to hold on to Kansas City’s lead.

ESPN’s Adam Schefter reported Mahomes cleared “some big steps” Tuesday and is expected to practice Wednesday. However, he remains in concussion protocol. Mahomes is also dealing with a foot injury suffered Sunday…