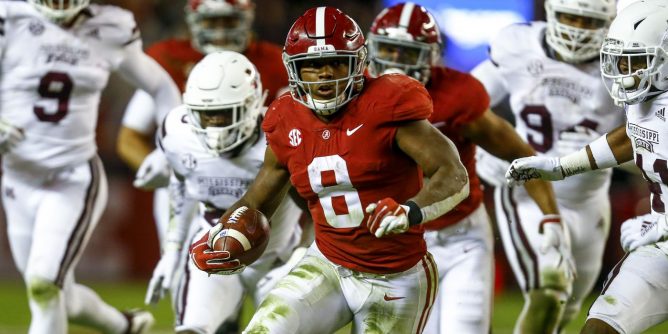 Ben’s take: “Jacobs is an interesting player. He’s a 220-pounder in a draft with not a lot of big, heavy running backs. He doesn’t have a lot of mileage on him. Only had 251 carries in three seasons at Alabama. Teams that believe mileage is a finite thing and that the body can only take so much wear and tear are going to like that about him.

People are questioning his top-end speed because he only ran a 4.6 40 at his Pro Day. But that’s fast enough for his running style. He’s more of an explosive runner.

“He’s a tough yards-after-contact runner. You can’t arm-tackle him. He’s going to fall forward and is good in short-yardage situations.

“One of the reasons people are excited about him is because he’s good in the pass game. He has very good hands. He can adjust to balls behind him. Ran a lot of down-the-field routes at Alabama, including some where he had to change shoulders during the process of tracking the ball, and had no trouble doing it.”