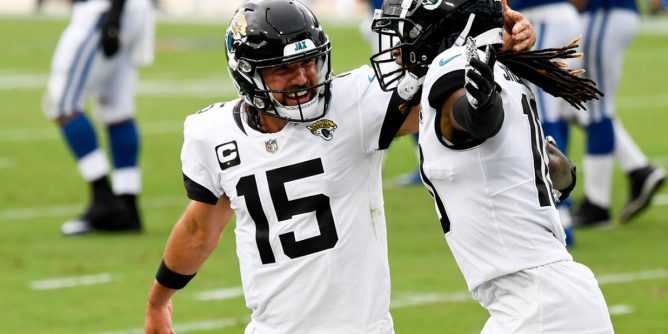 This isn’t an easy one for me to write. During the offseason, after seven diligent years on the Jaguars’ bandwagon , I hopped off, errantly assuming that the team was packing itself in a cardboard box and shipping itself to Trevor Lawrence’s doorstep….

Gardner Minshew, who most of us wrote off as a meme that erroneously passed in and out of our lives last season, completed 19 of 20 passes for 173 yards and three touchdowns.

And so it goes. Those of us who gave up our seats on the bandwagon were left watching a spartan version of the team we perpetually picked as the trendy choice to reach the playoffs show up and mow down the Philip Rivers and the Colts—probably the trendiest pick to reach the playoffs in 2020. A series of camera shots—Wingard celebrating the pick; a dancing woman in the stands donning a cheetah COVID mask and denim shorts; and a smiling Minshew, content in knowing that everyone who wrote him off would have to write a terrible column like this—was so perfectly Jacksonville.

It was wild and uninhibited. It was somewhat anonymous and beautiful.

What we already wrong about in the NFL season at www.si.com