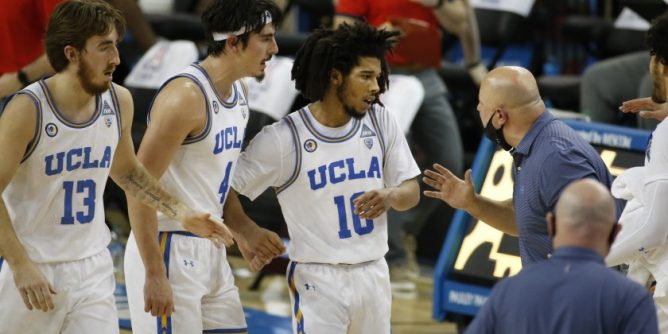 Mick Cronin has relived his most magical season multiple times, rewatching every moment of every game, with one exception.

“I just hit pause,” Cronin said Monday of his routine for withstanding the agony of Jalen Suggs’ 40-foot bank shot that sunk UCLA at the end of a Final Four loss to Gonzaga. “Things that don’t matter — social media comments, half-court bank shots. There’s nothing I’m going to learn from watching that.”

As for his team’s encore, the Bruins coach is eager to press play. Every player is back from the unexpected run to a national semifinal, making UCLA a fashionable pick to return to college basketball’s biggest stage. Several media outlets have picked the Bruins No. 1 or No. 2 in their preseason rankings, creating a welcome buzz.

“Just cause I’m from here,” said junior guard Johnny Juzang, who grew up in the San Fernando Valley and starred at Harvard-Westlake in Studio City, “seeing the program be something that the city’s proud of is awesome.”

For the first time since his arrival 2½ years ago, Cronin will be expected to have his team playing on the final weekend of the season. A reminder of the mission can be found inside the practice facility, where a giant photo of confetti-covered players wearing Final Four shirts hangs over the entrance to the court…